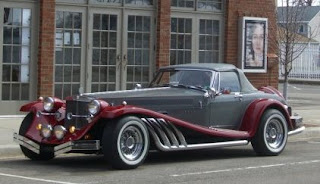 My last posting to the blog spoke of the last time either Mario or I drove the Clenet. It was sometime in early November before it was stored for the winter months. Last winter we had a break in the February weather that gave us a very warm weekend with daytime high temps pushing sixty degrees. Mario and I were eager and excited to take the car out for a spin.
Today, the 1st of March 2010, I had a crazy notion to take the car out for a drive. After a quick breakfast, I left my home in Three Oaks. While on the road, I phoned Mario to see if he was interested in joining me. He was twenty miles away showing homes to a client and seemed preoccupied to continue the phone conversation. I told him to call me when he became free.

I continued driving to his home in order to retrieve the keys and alarm code for the garage where the car has been stored. The idea of taking the car out for a spin was becoming more and more promising as I journeyed towards Mario's home. The streets were dry and clear - something I was hoping for! Mario's home is tucked away off the beaten path on a private dirt road that doesn't get much sun! The X-type (AWD) was having some trouble getting through the remaining slushy snow. I've never gotten stuck while driving the X-type today was no different. I was determined to get the keys and the alarm code!

The Clenet is stored less than a mile from Mario's home - luckily in a garage that's located in an area that has paved roads. After retrieving the keys and code, I made my way to the garage and was very happy to find all of the paved roads and streets clear and dry. Within minutes I had the garage opened and the alarm turned off. I pushed the car out of the garage, closed the overhead door and then locked up the home and garage. I jumped into the Clenet, pumped the gas about 10 times and turned the key. I knew the car would quickly fire and it did. I let the car warm a bit in the driveway as I checked the gauges and mirrors.

In less than a minute I was motoring along the Red Arrow Highway headed towards New Buffalo. It was wonderful driving our baby...with appropriate 70's disco and pop music accompanying me. I took the opportunity to fill the tank, check the appropriate fluids and clean the windows at a local filling station where an elderly couple approached me to compliment the car. I've turned a few heads along the way...most likely people wondering who's the eccentric driver motoring about the area in a Clenet.