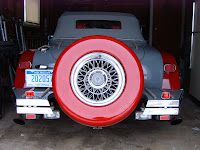 The Clenet has been getting some updates over the long winter hibernation, one being swapping out the vinyl spare tire cover with an original metal cover painted to match the fenders. We found one through fellow Clenet enthusiast Len in Washington State. When Clenet did a two-tone paint scheme, typically the spare tire cover matches the fenders along with the interior and top. Given our car has a red leather interior, we chose to repaint the fenders red which gives the car a new look without any of that 70's garishness some manufacturers chose to do.

The three-piece cover arrived primed and ready for paint about three weeks ago. Mario and I took the cover to the bodyshop in Union Pier where the car was repaired compliments of last summer's collision. Mike at the shop had copious amounts of paint leftover from the fender repair/repaint and we gave him the task of painting the cover.

Mario retrieved the painted cover a few days ago with the intention of us installing it onto the spare tire this weekend. The car is currently at Ken's house instead of the garage we are borrowing for the winter in Lakeside. At my request, Mario brought the car to Ken's last Sunday during a mild sunny winter morning. Within hours of Ken and I taking the car out for a winter drive, Lake Michigan coupled with western winds brought us heavy lake-effect snow that caused us to quickly abandon our jaunt and get the car out of the falling snow. There wasn't any time to return to Lakeside. The XK8 was quickly removed from its winter storage and the Clenet now has that space. No worries, we took the XK8 to Lakeside where it will remain until the roads are clear and the two cars can be swapped back.

Friday evening, Mario and I ducked into the garage to install the tire cover while Ken was preparing dinner. I removed the original vinyl tire cover to test-fit the new hard-shell cover. We were both very perplexed when the cover would not fit over the spare tire. Everything we tried, including letting the air out of the spare kept us from getting the cover over the tire. Darn it! The tires we had installed last summer are obviously just a bit larger than the originally fitted tires. Being disappointed, we decided to reconvene Saturday morning to address the problem.

After breakfast the next morning, Mario and I removed the spare wheel from the car and took it and the new tire cover to Sears in Michigan City to purchase a replacement spare tire. The goal was to find a new tire that would fit into the hard shell that was a similar in size to the Coker's on the car.

About a hundred dollars and two hours later, we now have a spare tire mounted on the wire wheel that allows us to utilize the new cover. The red cover completes the new two-tone paint scheme and gives the rear end a more substantial look.

The next addition will be hand-painted gray pinstripes along the fenders and encircling the spare tire cover to balance the gray body color.
Posted by Ron at 2/22/2009 11:31:00 AM