A Twin For the Clenet? 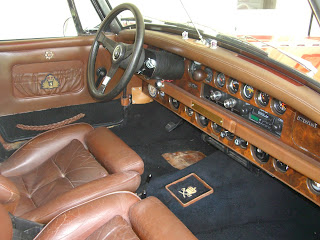 Every-so-often I check out the usual on-line resources for Clenet S-1's and their related parts that might be offered for sale. In mid-July I came across a simple classified ad in the Auto Bible known as Hemmings Motor News. The four-line ad merely stated that a 1979 Clenet was being offered for sale with mileage known to be in the low 40's.
With '79 being the transitional year between the S-1 and the S-2, I was reluctant to call as the seller had not included that information nor a photo of the car. A good week had passed with my curiosity finally getting the best of me and I dialed the phone number. I was greeted by a gentleman who enjoyed having lengthy conversations. The first question I asked was if the Clenet being offered was a Series I or a Series II. The seller immediately confirmed that he was selling a genuine Series I Clenet and asked me why most callers as that question. I did not have an answer for the other people who may have called him, but my answer was that I am only interested in acquiring another Series I.
The seller being most endearing kept me on the phone for almost an hour, even though he kept telling me he needed to be at a local outdoor music performance. I was able to break the conversation and told him to enjoy his evening as I agreed to phone back the next day. That following afternoon I found time to call the seller who again was able to keep me on the phone for another hour. This time it was I who was late for a dinner engagement and did my best to get my questions answered.
Through no less than three lengthy phone conversations, the seller seemed to have an extensive history of this particular Clenet. At one point during one of the phone calls, he took his cordless phone out to the car where he was able to tell me the Car Sequence Number, VIN and other unique identifiers that confirmed the car was authentic. I had to ask these questions as I've found several advertisements offering a Clenet for sale that actually isn't.
After having the conversation with the seller, I got the crazy notion to drive 10+ hours south to see the car and called my brother Mario to see if he was up for an impromptu road trip. The following afternoon we hopped into the XK8 and drove clear through to southern Tennessee after having dinner in Louisville, Kentucky. The next morning we awoke to rainy skies and continued our journey into Alabama and arrived at the seller's home within minutes of our ETA. The rain was clearing and we were greeted with bright skies and periodic sunshine.
As we approached the home, there it was...parked outdoors under a carport. A red and beige Clenet S-1. My immediate reaction to the car was that the paint color seemed a bit "off" from what I would expect from the factory. Within a minute of inspecting the car, I confirmed the body had been repainted as the caramel leather interior didn't compliment either the body nor fender colors. The car was solid as far as the frame and metalwork were concerned, however the previous owner took too many liberties with "customizing" the vehicle by adding his monogrammed initials, tooled leather accents, various armed forces & higher education insignias everywhere possible...with a rivet gun! The fenders showed prior repair work that was sophomoric at best and many exterior accessories were broken, in need of replacement. Upon further inspection we found no less than 15 areas the first owner haphazardly engraved his name into body parts and components.
Having driven over 600 miles one way, we chose to stay longer than necessary to thoroughly inspect this particular vehicle. We took over 50 pics of the car to help reinforce our decision to take a pass on the car. The seller's opinion of stated condition varied greatly from my opinion of the vehicle. I used our Clenet as the benchmark to use as comparison when making the determination. I extended my opinion of what the car was worth (to me) and the seller immediately replied that he would not sell it for that price.
Being very disappointed with the car, Mario and I thanked the seller for his time and began our ten-hour journey back home. The entire 600 miles of driving, we never turned on the car radio; instead we talked about our Clenet, this particular Clenet among other subjects to pass the time. We both agreed that even with its issues, our car is a museum piece when compared to the poor thing we just drove 600 miles to see. As stated, the frame and metal body seems to be solid, however most everything else needs to be repaired or refurbished to bring this car around. I'd consider the challenge, however nowhere near the advertised price.
With the dog days of summer here, Mario and I are hoping that we can find time to perform some exhaust and brake work on our Clenet. In the meantime, we'll be enjoying and respecting our car.
Posted by Ron at 8/07/2009 12:33:00 PM