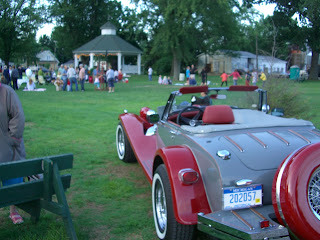 We're about half way through Summer and we've been enjoying the Clenet. It's mid-July and just yesterday we drove the car from Southwest Michigan to Kankakee, IL for a LCC gathering in Cobb Park, a wonderful and historic riverside neighborhood.

We drove back to Michigan in time to attend an outdoor affair hosted by J. L. Powell and later, Music in the Park at Dewey Cannon Park in Three Oaks, Michigan. Mario drove the Clenet first to J. L. Powell and then to the park. We met with a few friends and enjoyed the performance.

The Clenet drew a good amount of attention and I let Mario field the many questions asked by the small group surrounding our car. Afterwards Ken and I walked to Infinitas Salon and Gallery for a nightcap. Mario brought the Clenet home for me and I called it an evening.

Today we agreed to show the car at J. L. Powell's outdoor show and I dropped it off just after having a late breakfast. As I arrived, I met with the owner and he immediately ushered me into a spot directly in front of his establishment. This was the very first time we ever left the Clenet unattended for more than a few minutes, however I trusted the crowd would respect it. Upon returning more than five hours later, the Clenet was 100% intact and I overheard people discussing how wonderful the looked. Again, I fielded a few questions and had a lengthy conversation about the car and Clenet Coachworks with a very eager bystander.