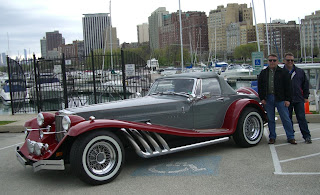 LCC-LMR Spring Dust Off at the Belmont Yacht Club of Chicago.

This past weekend Mario and I drove the Clenet from Michigan to the first LCC-LMR event of the season hosted by the Belmont Yacht Club. We arrived about twenty minutes into the gathering with most of the attendees already there. A parking space for the Clenet was saved closest to the harbor for the Clenet.

The last official LCC-LMR event was the Fall Driving Tour back in October of '08 just a week prior to us dismantling the fenders for the repairs over winter.

This was our official unveiling of the car after its winter transformation. Mario and I headed out from Lakeside, MI early Saturday morning after having breakfast at Bailey's in Three Oaks with Ken. We had just returned from a road trip to North Carolina via Daytona Beach, Florida. The day was cool, windy and a bit overcast. We encountered some rain through Northern Indiana, however it quickly dissipated and we were able to enjoy the Spring Dust Off event.

Many people within the car club, members of the yacht club and the general public who happened upon the car show gave us very positive feedback and many compliments. We fielded many questions and were very eager to tell the Clenet story. One man who saw the cars assembled from his high-rise across Lake Shore Drive hurried over to see them. He struck up a conversation with me and at first, didn't realize our car was a Clenet. When I had begun to tell the story, he then remembered the Clenet factory in Santa Barbara when he lived there back in the late 70's.

This coming week prior to us leaving for the LCC Grand Invitational being held in St. Louis over the extended Memorial Day holiday weekend, we are having the fenders pinstriped with a light gray paint to match the body. We will do our best to have the pinstripe artist match similar stripes that were painted on the Clenet owned by Jerry Capizzi.

We are looking forward to the caravan that is leaving Chicago next Thursday morning via I-55 to St. Louis.

Your car is beautiful. I saw it on Lake Shore Drive and found you here on the internet. You guys have something very special.

I saw your car in Saint Louis and found your blog. The car is stunning and I'm glad that I was able to learn more about the Clenet.