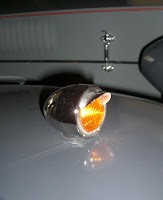 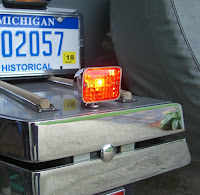 My brother Mario and I have been tooling with the idea of making some minor and one major change to the car.

The minor changes include exterior and interior lighting. The one and only element on the car that we think could have been better executed are the exterior turn signal lamps. We both agree they seem too large and flat, especially the front indicators. We would prefer smaller, chrome bullet style indicators that would mimic the shape of the driving lights and headlamp pods.

As for the rear turn indicator lamps, we are both in agreement they should be chrome bullets with a square lens as all other rear lighting lenses are square when viewed from behind.

On a recent weekend trip to visit our niece at her cottage in rural Illinois, we came across the retail space for JC Whitney auto and cycle parts. I found several bullet style lamps that could be used for either hot-rods or motorcycles. We purchased a few varieties for both the front and rear of the car and will make the decision to swap these out from the Yamaha cycle indicators that Alain originally used.

All original parts and pieces will be stored safely at Mario's home if we ever need to put the car back to original condition.

As for the interior lighting, while driving at night, the lower dash beneath the tray is not lit very well. The two small pivoting lights buried in the floor carpets between the seats do not illuminate the lower dashboard as planned. To bring more light onto the lower dash, we found a few small chrome lamps that can be mounted to the underside of the dash tray and attached to the dash lights. This will require some planning on our part for the aesthetics and electrical work required.

Now...for the more drastic changes...
We recently received word from our adjuster and appraiser from Hagerty Insurance regarding the collision repairs that are necessary from last month's little fender-bender. Both fenders need to be removed from the car to ensure a proper repair. With both fenders needing to be removed, repaired and then subsequently repainted, Mario and I are toying with the idea of changing their color from dark gray to deep red - to match the leather interior. We've seen similar color combinations where the body is light with dark fenders and alternating painted pin-stripes to coordinate the two colors - something like Jerry Capizzi's former Series I.

We are both intrigued with the idea, however we also realize the original gray on gray color combination is truly a classic design and should be honored.

We have a few months to think this change over as the car will be going into the body shop after we are done showing and driving the car this season.
-Ron Zarantenello
Posted by Ron at 9/03/2008 12:18:00 PM