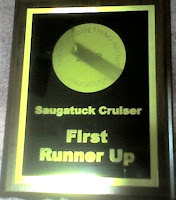 The LCC-MDR guys hosted their annual early Fall event known as "Something About Saugatuck" in S.W. Michigan last weekend. A handful of guys from the Chicago area brought their cars out in the endless rain to be part of this annual event. The meet was held in Saugatuck/Douglas, MI at an all-inclusive, somewhat retro 1950's resort.

The west coast of Michigan is known as Chicago's Hamptons with many lake-side resort towns that span the last 100 years. This event is usually well attended by at least 6 Midwestern groups with guys from Minneapolis, Chicago, SW Michigan, Detroit, Indy and Columbus. Our group booked the entire resort and the spill-over at nearby hotels.

Mother Nature was not cooperating and gave us the combined efforts of a Northwest weather front combined with the remnants of Hurricane Ike - bringing billions of gallons of rain to the upper Midwest. We remained optimistic as the 10-day weather forecast gave us a mere 30% chance of rain all weekend.

We removed the hard-top from the Clenet and relied on the canvas soft-top to keep us dry and headed towards Saugatuck on Friday morning. There were momentary patches of light rain as we motored along, nothing that we felt would become a problem. We expected some rain infiltration into the car as we both drove MG's when we were in our late teens and early 20's.

We arrived at the host resort, parked the Clenet outside our first-floor room and immediately began to party. This was the first large-scale meet where we shown the Clenet. Many of the guys asked questions and we gladly answered.

The car show was held at its scheduled time on Saturday with everyone walking among the cars with their umbrellas or hefty-bags used as makeshift rain gear. Nobody was going to let a little rain dampen our spirits. Ken joined us just after the car show and brought my XK-8 from Three Oaks. Later that night at the awards banquet, our Clenet took runner-up for the "Best Saugatuck Cruiser" award. Mario and I are absolutely delighted considering the competition was fierce.

With the rain not letting up on Sunday morning, Ken and I decided to leave early and head back to Three Oaks, letting Mario take the Jag on real estate appointments. The rain continued and the Clenet let us know he was not happy being driven in it. The water entered the passenger compartment from behind the dash, through the rear window stitching and at least a half-dozen other entry points.

We now understand the Clenet is a fair-weather vehicle...but at least we have our first trophy to show off!