A new carburetor for the Clenet... 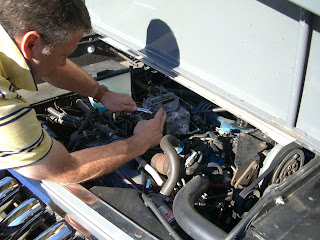 After we picked up the car from the Ford dealer last month, the car still had an annoying rough idle/ surge problem. As the Clenet reaches operating temperature, the idle surges past 1,200 rpms and then drops under 400 rpms. The surging and sputtering continues until the engine eventually stalls and is most embarrassing when driving up to a stop sign or stoplight.

Over the past 4 weeks, we've re-checked many of the new tune-up parts installed by the Ford dealer several times over! I communicated the rough idle with Tom Pierpoint of the Clenet Registry in California and he suggested replacing the Dura-Spark ignition module. To our dismay, the rough idle is unchanged. After replacing the ignition module, we tested vacuum lines along with replacing some of the vacuum temperature valves - which aren't cheap or easy to remove! Again, same condition.

We have also adjusted the carburetor at all of the adjustments screws we would find and again, anything we did would change how this car was running. Being frustrated and annoyed, I went on-line and found a rebuilt, California-emission carb out of a Phoenix, AZ shop. The shipment arrived late, so we ended up showing the car last week at the Illinois Transportation Extravaganza in its sickly state. The next day, the new carb arrived in Michigan and Mario quickly went to task and made the swap while I was at work in Chicago.

That afternoon my office phone rang with Mario on the other end. He couldn't contain his excitement...the car was idling as originally intended. No more surging, sputtering nor stalling. The beast has transformed into the elegant motor vehicle it should be.

The following Wednesday afternoon, Mario brought the Clenet to Chicago from Michigan to join us at the Millennium Park Orchestral concert that evening. While he and his business partner were on my balcony enjoying the view and a good red, I quickly took the Clenet out for a drive through the Gold Coast neighborhood. Being pleased that I was finally able to drive the car normally without one foot feathering the gas pedal and the other holding the brake, the car seemed effortless to pilot.

As we continue to improve the car, we are now concentrating on the one final piece to make this car whole...finding the elusive original Waterford crystal ashtray. Let's keep our fingers crossed.