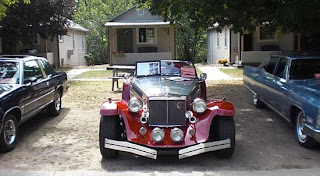 Mid September came around with the LCC-MDR guys hosting an extended weekend in Saugatuck, Michigan. My first visit to Saugatuck, MI was the summer of '89 when the Lake Michigan Region (Chicago) chapter of the LCC journeyed around the lake from Chicago. Back then, us Chicago guys would take several extended weekend trips to Saugatuck throughout the "driving" months.

This year my brother and I wanted to show the Clenet, complete with facelift and our Cadillac Fleetwood that hasn't been driving much since purchasing the Clenet last year. The weekend prior to the Saugatuck weekend, Mario pulled the Cadillac out of the garage and we spent a few hours working on it. I mentioned this in a prior blog post when I had the Clenet out front of Milda's Corner Market in Union Pier on a sunny Sunday afternoon. 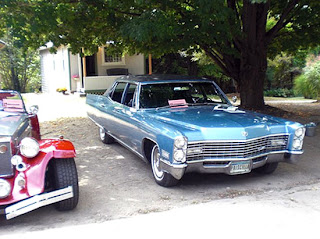 Our good friend Larry from Chicago wanted to join us in Saugatuck; however he recently sold his weekend cruiser, a stunning '84 Riviera Convertible named Carlotta...because she was a lot of car! I convinced Larry to bring one of the commuter trains from Chicago to nearby Michigan City, IN mid-day Friday. Mario then would collect Larry from the depot, continuing up the lakeshore to Saugatuck. I would drive the Clenet solo from New Buffalo and meet up at the host resort. Mario, Larry and I blew-off the Friday evening reception and invited antother five guys to join us for dinner in neighboring Douglas, Michigan. All eight of us nestled in the Fleetwood, we certainly made our presence known as we secured rock-star parking right out front the restaurant. Mario docked the Cadillac next to a Toyota Pius with a few chuckling as we disembarked for the restaurant. Our table being reserved allowed us to glide past those waiting in the crowded reception area and we immediately ordered several fine bottles of red. Frank and Mike…thank you for the libations!

Several Midwest regions of the LCC join the fun when the Michiana Dunes Region hosts this annual meet. We always enjoy seeing a good number of friends from both the Eastern and Western parts of Michigan, Illinois, Indiana, Ohio, Wisconsin and Minneapolis. Many fabulous cars were driven with an (almost) matching pair of '56 Continentals, early 50's Bentley and the proverbial plethora of 50's / 60's chrome & fins! Muscle from the 60’s and 70’s, fully restored pick-ups and early smog/fuel shortage runabouts brought back memories of grade school and high school years! 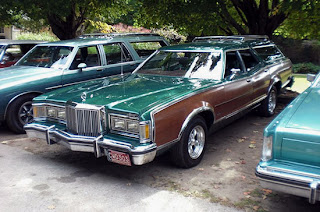 The nice thing…our Clenet was the one and only, with the exception of a long lost relative being shown! An absolute immaculate 1979 Mercury Cougar Wagon in Forest Green graced the weekend show! The Saturday afternoon car show could not have been nicer with the weather being very cooperative and pleasant. Last year’s event was curtailed with biblical rainfall and an almost flooded Clenet! 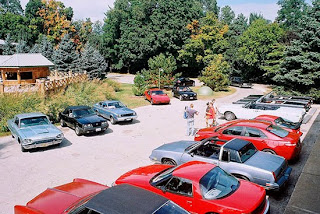 Much fun was had all weekend with activities taking most waking hours. Sunday morning came and I had to leave early to meet Ken who was visiting with a cousin that he hadn’t seen in many years in nearby South Haven. With my weekend duffle packed, I said my goodbyes to a few friends milling about and wiping the morning dew from their cars. With coffee in hand I motored away knowing that the driving season of 2009 is just about over. I savored each and every mile driving the Clenet from Saugatuck.